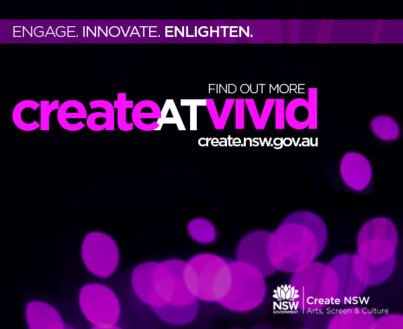 In the lead up to this weekend’s Vivid Festival panel I was interviewed by Create NSW, the state agency for arts funding.

You can read the original here.

How do you maintain your practice and pay the bills? How do you achieve a balance between creating artwork and your other jobs?

As part of Vivid Ideas we are holding an event that will delve into all these questions and offer mid-career artists new thoughts on this tricky career stage.

Ahead of the event we spoke with interdisciplinary artists, Rebecca Conroy who will also be talking on our panel.

Tell me about your practice and how did you get started?

I started out in theatre, self-devised work, and pretty soon worked out that collaboration was a key part of my creative DNA. This work drew me towards fairly politicised community engaged settings, seeking to understand and interrogate certain issues. My academic studies then pushed me deeper into ‘theatre that matters’, and I strangely ended up in the underground arts scene of Java, Indonesia where I really cut my teeth in working cross disciplinary practice and learning about making art in the context of a military regime. Not a conventional subject on the syllabus but immensely helpful for learning about the importance of artist-led practice and the special properties of culture-making that enables you to straddle many worlds and shift things. This eventually led me back to Australia a decade later where I co-founded an artist-run space, the Wedding Circle, in Chippendale and ran a festival, Gang Festival, which brought together the two worlds, and expanded my practice to gallery spaces and site-based experiments.

What inspired you back then?

Renegade, clandestine, subversive activity inspired me back then as it does today. Although of course, as the political terrain has shifted, so have the ideas and strategies and forms to engage with it. But I continue to be inspired by the fertile ground that brings transgressive ideas to the surface; rupturing things, breaking things, shifting things. For me, artistic practice has always been imbricated with critical enquiry; I like this cusp position, and the movement between opposing modes and energies, I think it makes for good work. I also continue to be anchored by an artist-led philosophy which initially grew out of my devised performance making, and has now solidified into a more comprehensive position about ‘Nothing about us without us’ or a ‘leading by example’ mode or philosophy. I think the best work happens when people feel self-determined and self-directed, and can practice feeling ‘confidently vulnerable’ in the right situations to create work.

How has your work evolved throughout the years?

The most significant consistent evolution for me has been across form; starting out in writing for theatre, and devising and directing and now finding myself, after a period of writing, curating and producing, working in large collaborative settings in an interdisciplinary manner, to now going back into my practice as an experimentation with form and crafting a set of performative strategies to create encounters. This has also involved an ever-growing sophistication in my relationship to space and spatial praxis. It starts with theatre as that aesthetic space where a contract is drawn up and held by the audience and performer/agent in a weird magical agreed suspension of disbelief within a physical space that is demarcated with the active participation of an audience. I think my relationship to audience—and my desire to create situations for things to happen with others, by soliciting and putting out an invitation—has also evolved out of this curious proposition.

How did you find yourself at the point you are creatively now and how have you maintained your motivation?

Perhaps a mix of brutal naive optimism and looking around at the world with dismay and a pragmatic desperation to avoid participating in the rat race? I think working in the arts almost requires this cognitive dissonance – where you are forced to act pragmatically but think outrageously, or maybe act outrageously and think pragmatically. It’s like a mental illness that helps you cope with the mental dis-ease of the world. Seeing the effect that meaningful practice has on the world is motivating; but also I think being driven by an unstoppable current of ideas and dreaming seems to be enough for me. Poverty/hardship/precarity has never stopped me although it has drained, and exhausted me. But it has never been a sufficient rationale to completely obstruct my path. And I was a single mother at the age of 21 so, in some ways, maybe I was acculturated to the impoverished path of the artist!

Interestingly, I think one thing that has sustained momentum for me is almost all my ideas have emerged out of a concrete situation, works that fuse an interesting design or proposition embedded within a practical outcome, or a work that is used as a vessel to drive some kind of practical solution to a problem. So with Yurt Empire that project emerged from my frustration with the lack of affordable housing, and the idea that we could just build a yurt and smuggle it onto a vacant lot in an undeveloped part of the city, and call it art, and live in it. That idea spawned a series of designs, an exhibition, and a video and a number of labs with 23 artists across 15 different disciplines.

Sydney is an expensive city to live in, and there’s talk of the creative class getting pushed out. What are your thoughts on the benefits of living here versus the costs?

Well there is no doubt that rising rents have pushed creatives out of the city, and have distorted the ecosystem, making the urban centres conducive to only certain sorts of creatives flourishing. So overall it is tending towards homogeny, which as you can imagine, is the enemy of the art. But also the enemy of everyone; cities are complex beasts that require diversity in order to function and self-regulate. Just like any good gut biome. You can’t build cities on the basis of one slim income bracket. And I think it sucks that artists are forced to move away, because every time that happens, our communities haemorrhage and we leach out valuable social relations, connections and knowledge—our core currencies. I am working on building a community land trust as the only viable solution I know to intervene in the rising property market absurdism.

Was there a time when you were struggling and thought about giving up on art and doing something else that could be more financially stable?

That probably happens about four times each year. Absolutely.

What advice do you have for mid-career artist to keep their fire alive?

Collectivise! Work together! Work against the grain, but work against it together. Also stay connected to an international network of artist communities; I find this inspiring and necessary fuel. It can get quite suffocating and conservative in one place. As they say in finance, diversify your portfolio! I am not a big fan of working in the arts as an “artist” 100 per cent of time; I think its healthier to mix gardening, or cooking, or laundry, or some other trade alongside your art practice.

Can you share with us a defining moment or a learning curve?

Every project I work on or dream up is yet another learning curve. Which is wonderful. I always seem to get redefined and remade when working in indigenous spaces and with indigenous folk.

What are you working on now?

I am working on a bunch of interconnected projects or iterations on a theme—the intersection of art and economy. This is a platform of ideas that I bundle under the banner A Very Beautiful Laundromat. They range from an artist-led curriculum on economy (Marrickville School of Economics) which travels to the UK in August, to a commissioned performance work (The Iron Lady) a fake business shirt ironing venture and pop up salon which will premiere in Adelaide during November. All of these experiments are leading to the big outcome which is an artist run laundromat that I am establishing with 3 others under the moniker of Money Laundering. You can read about it here, whilst you watch this space.